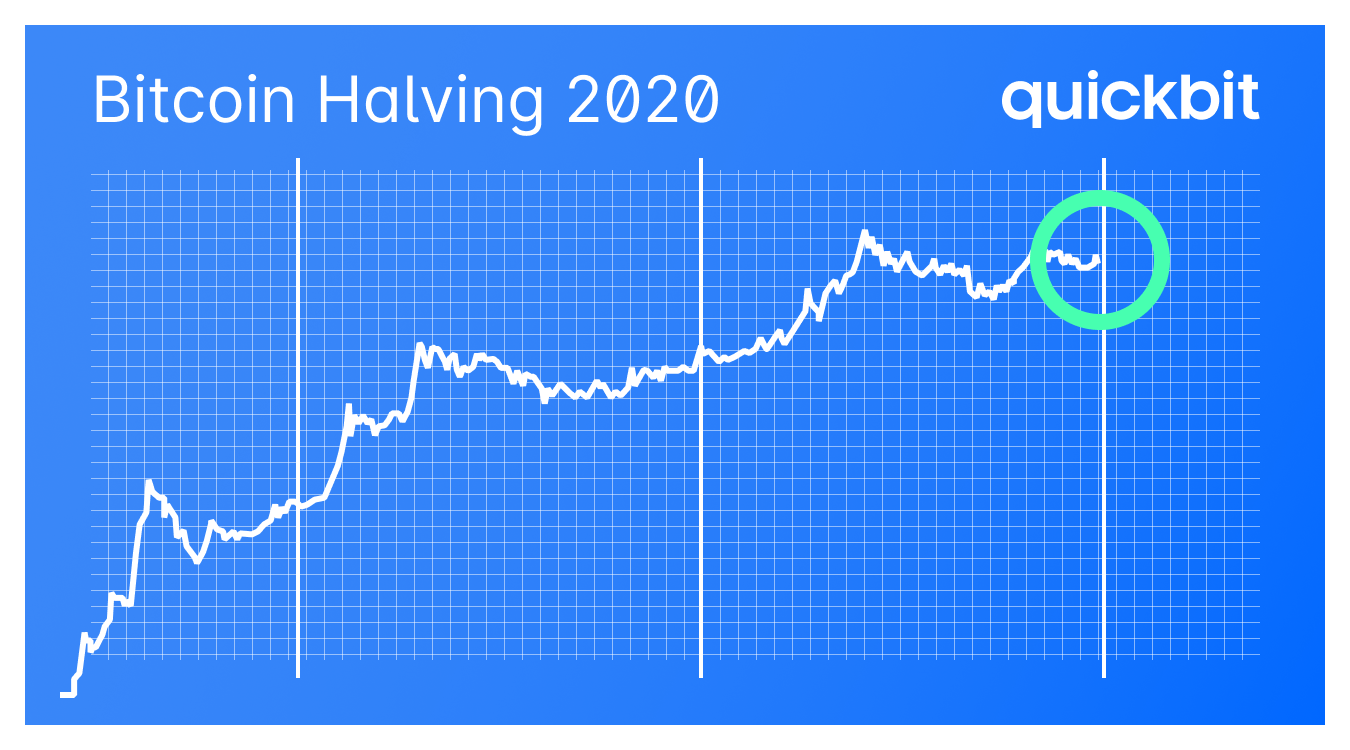 Below you can learn about the Bitcoin Halving event. QuickBit is commemorating the event and running a 48 hour 0% service fee promotion on purchases made at quickbit.eu

“In short, the Bitcoin protocol cuts the bitcoin block reward in half. Every time a Bitcoin halving occurs, miners begin receiving 50% fewer BTC for verifying transactions.”

Even if you aren’t engaged in the different crypto or blockchain communities around the web, you have probably heard about the coming Bitcoin halving. It is one of the fundamental properties of the Bitcoin protocol – the rules governing how Bitcoin functions. In this article, we want to provide some clarity into what the event is all about, and what implications it might have.

What is it?
Whenever a transaction is made, Bitcoin miners document the purchase or sale by recording a collection of these transactions into “blocks”, which – when linked together – forms the blockchain. They verify the activity on the chain and make sure that transactions are accurate and that no bitcoin is duplicated (spent more than once at a time). This ensures that you can purchase things with bitcoins the same way you can with cash, and without this process, Bitcoin and other similar cryptocurrencies wouldn’t work.

These blocks are generated every 10 minutes and for each new block, a set amount of bitcoins are created and sent as a reward to the miner who verified a block. Currently, that reward is 12.5 bitcoins. What the halving event means, is that the block reward is cut by 50%. Originally, back when Bitcoin was launched, the reward was 50 bitcoins for each block verified. Since then, two halvings have occurred, cutting the reward to 25 and 12.5 bitcoins respectively. This time, the third halving, the reward will go to 6.25 bitcoins.

In short, the Bitcoin protocol cuts the bitcoin block reward in half. Every time a Bitcoin halving occurs, miners begin receiving 50% fewer bitcoins for verifying transactions.

Why does it happen?
The halving is a way to ensure the deflationary properties of Bitcoin, in that there is a fixed maximum supply of bitcoins ever to exist (21 million) and that the increase of supply up until that point follows a determined rate. For investors, this means that the future supply of bitcoins is known. Fiat currencies on the other hand, are inflationary in that the supply can be increased, for example as a stimulus mechanism for the economy during the Covid-19 pandemic.

What are the implications?
For miners, the revenue generated from mining will decrease by 50%, which means they will need to get an increase in revenue from transaction fees instead.

For investors, the Bitcoin halving has historically been followed by a long term increase in price. If that is the case this time around as well, only time will tell.

We look forward to seeing the event unfold together with you, and to commemorate the event we’ve decided to cut the service fees altogether when you buy crypto currencies through QuickBit.